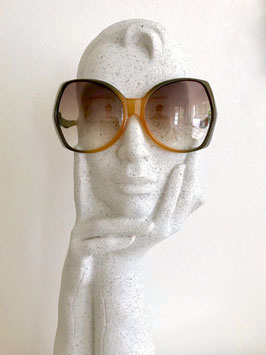 These ultra-rare Christian Dior D06 sunglasses feature an oversized bi-coloured butterfly-shaped frame. The frame is made in Optyl with the fading of colours from amber to khaki. The plastic lenses are tinted in gradient brown (non prescription). The D06 model is one of the first Christian Dior sunglasses that have been produced.

A collector's piece of fashion history!

These sunglasses are in excellent vintage condition. The black filling of the CD logo on the right temple is slightly rubbed off (see picture 9). Lenses in perfect condition except one short hairline scratch on the right glass beside the hinge. Not visible. Just mentioned for accuracy. 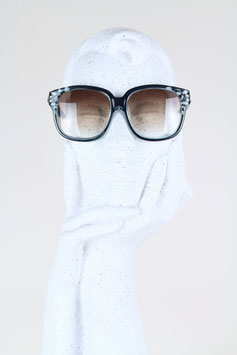 Collectible signature sunglasses by Emmanuelle Khanh from the 1970s.

These rare and sought after model 8080 sunglasses are hand made in France and feature an oversized clear blue frame that is shaded in black. The edges are decorated with leaves-like cut-outs creating a three-dimensional effect. It comes with its original square gradient grey lenses. Both temples bear a silver metal "EK" logo on the outside. On the inside they are marked “Emmanuelle Khanh Paris“ and "8080 191".

Former haute couture model, fashion designer and stylist Emmanuelle Khanh was born Renée Georgette Jeanne Mézière in 1937 in Paris where she died on 17 February 2017. Emmanuelle Khanh was often called the French Mary Quant and known for her modern and youthful designs. In a 1964 Life magazine feature, Khanh declared, "The couture is dead; I want to design for the street." She formed her own company in 1971 and in 1972 she decided to create a collection of bold and colourful glasses. From this will result a series of iconic models, including the famous 8080 frame, worn by Emmanuelle Khanh herself and many celebrities such as Stevie Wonder and David Bowie.

These sunglasses are in excellent vintage condition. The frame shows minor wear that is only visible under close inspection. The original lenses show minor scratching and two visible scratches at the corners of the lenses that do not photograph. Due to the position they do not affect vision.

STAY IN TOUCH. Sign up for Oh! Jackie NEWS!