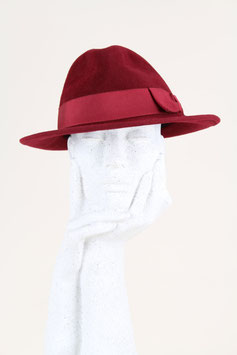 This fedora hat is crafted from wine-red rabbit felt and finished with a tonal grosgrain band with bow at the left side. The hat is unlined with a dark grey grosgrain ribbon inner hatband. It is labeled "Jean Paul Gaultier Femme, Made in Italy".

Jean Paul Gaultier was born in 1952 near Paris. He started his career, aged 18, with an apprenticeship in the fashion house of Pierre Cardin. In 1976 Gaultier showed his debut collection but did not establish his own design house until 1982. He soon became known as "l'infant terrible" of fashion because of his penchant for challenging the then-standard views of fashion. Many of his collections show women-

adopting masculine attire. Gaultier became internationally recognised when he designed the costumes for Madonna's Blond Ambition tour in 1990. In 1997 he showed his debut couture collection. From 2003 to 2010 Gaultier was the creative director of Hermès. He created also costumes for Australian pop singer Kylie Minogue and for a number of films. Gaultier closed the ready-to-wear labels to focus on haute couture in 2015.

This hat is in excellent vintage condition. Looks rarely, if ever, worn. 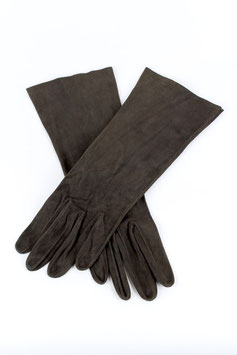 These espresso-coloured mid-length gloves are crafted from ultra-thin and butter soft suede. Amazing quality! The gloves are unlined and measure 29 cm – 11.4" in total length. Estimated size: 7 to 7.5.

Excellent vintage condition. Seem to have been worn very little, if at all. 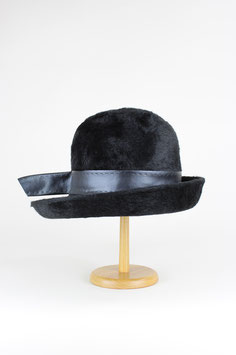 Dressy hare fur hat by Sharon Originals from the 1960s.

This bowler style hat has an upturned brim and is made from black hare fur (crown and outside of the brim) and wool (inside of the brim). A black faux leather band circles the crown. The hat is unlined and there is a black grosgrain ribbon inner hatband. Inside there are three labels reading "Sharon Originals", "La Scala Genuine Lustre Imported Hare's Fur, Body Made in Italy" and "United Hatters Cap & Millinery W.rkrs Union Made in U.S.A.".

This hat is in excellent vintage condition. Hardly worn. 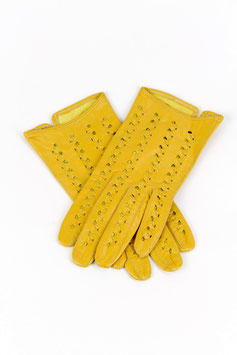 These short and airy sunflower yellow gloves are crafted from smooth leather. The upper side features a decorative punched and woven design. The gloves are unlined and measure 19,5 cm – 7.7" in total length and are stamped inside a size 7 3/4.

PLEASE NOTE: The yellow is a bit more reddish in person. Like on picture 6.

Excellent vintage condition. One pinpoint spot at the side of the left glove's long finger. Not noticeable when on. 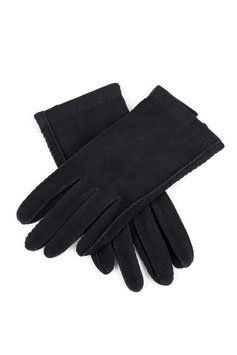 Roeckl was founded as a craftsman's workshop by Jakob Roeckl in Munich, Germany, in 1839. His vision was to make the finest gloves. He succeeded and Roeckl became a supplier to the Royal Court of Bavaria. The company is still active today. 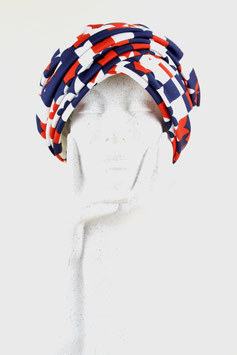 This beautifully draped 1950s/1960s turban hat is hand-made from a soft fabric with a lovely stylized heart print in navy, cherry-red and white. Gorgeous details of pleating, folding and twisting! The hat has an interior cream grosgrain ribbon band and is lined in a cream acetate fabric. It is labeled "Berliner Modelle", a former millinery in Berlin, Germany.

PLEASE NOTE: The red hue is a classic cherry-red in person. Not as red orange as it photographed. 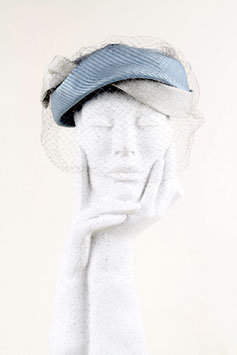 Ultra-elegant cocktail hat with veil by French milliner Mady Mauvan from the 1950s.

This 1950s cocktail hat is designed from an aquamarine ribbed stiff fabric and a light grey veil. It is decorated with a silver fabric detailing that starts at the left side and comes out on the right side as a stiff little wing. It should be worn sitting at the front of the head. There is an elastic cord for a more secure fit. The hat has an interior aquamarine grosgrain ribbon band and is lined in cream acetate. The label reads "Mady Mauvan, Paris". One size.

PLEASE NOTE: The aquamarine hue is a touch more greenish in person.

Excellent vintage condition. Two tiny faint spots at the front hidden under the veil. Only visible under very close inspection. 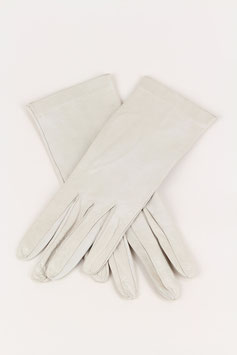 These gloves are made from champagne-coloured butter soft nappa leather of an amazing quality. The colour is even more beautiful in person! They are unlined and measure 24,5 cm – 9.6" in total length. Estimated size: 7 to 7.5.

Perfect for any elegant occasion!

Excellent vintage condition. Seem to have been worn very little, if at all. 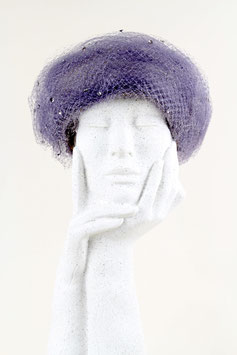 This charming and extremely light hat by legendary German milliner Berta Häusler is entirely done by hand. The base is made from tan tulle that is covered with draped lavender veil net and adorned with silver-gray sequins scattered here and there. The hat has an interior tan grosgrain ribbon band and is unlined. The label reads "Berta Häusler, München".

PLEASE NOTE: The lavender hue is a shade lighter in person. 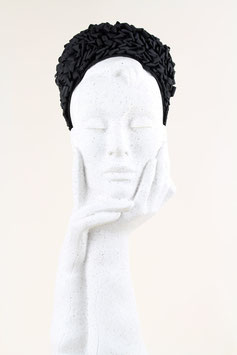 This is an unusual light hand-made 1960s black pillbox hat. The base is made from black stiffened tulle that is entirely covered in black looped taffeta ribbons sewn on by hand. The interior sides are lined in black slightly stiff linen-like fabric to give the hat more stability. The hat is edged with a black grosgrain ribbon and can be attached securely to coiffure with hair pins that can be affixed through tiny loops (zoom in picture 5) around the edging. One size fits all.

One size fits all. 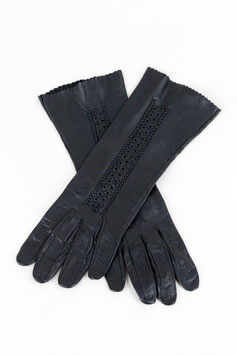 These elegant mid-length black gloves are crafted from butter soft smooth leather. They feature a wavy border and a lovely cut out detailing on the back of the hand that is edged with ornamental seams creating a subtle peek-a-boo effect. Very well made and amazing quality! The gloves are unlined and measure 29 cm – 11.4" in total length. Estimated size: 7 to 7.5.

Excellent vintage condition. Appear to have been worn very little. 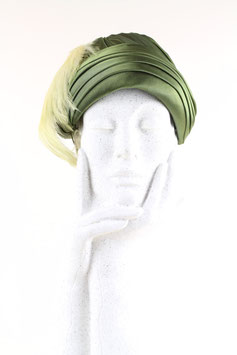 Fantastic draped and feather adorned cocktail hat from the 1950s.

This 1950s numbered, possibly haute couture, olive green silk satin vintage hat is adorned with peach feathers at the right side. Beautiful details of pleating, folding and twisting! The hat has an interior olive green grosgrain ribbon band, is lined in a cream acetate fabric and has an elastic band for a more secure fit. It is numbered "229140". The label is missing. 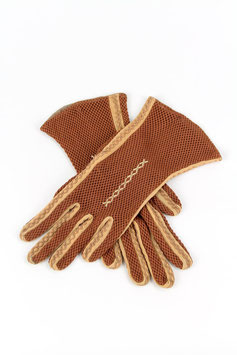 These gloves are crafted from brick-coloured mesh fabric. The seams are done in apricot-coloured fabric and embroidered with a matching yarn. Additionally the back of the hand is decorated with a cross stich embroidery. Lovely smooth material! The gloves are unlined and measure 23 cm – 9" in total length. Estimated size: 7 to 7.5.

Length: 23 cm – 9" (measured from wrist to the fingertip of the long finger)

STAY IN TOUCH. Sign up for Oh! Jackie NEWS!